Stories of HOPE – lives of children in Kolkata 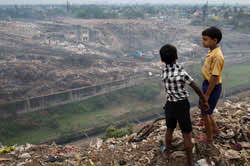 It can be difficult to credit the reality of the life that many of these vulnerable children face in Kolkata. Their lives can be all too often nasty, brutish and short. 1.65 million children will die before their 5th birthday, mostly due to malnutrition.

A staggering 100,000 children in Kolkata are street-connected children, living with no shelter and no protection from the dangers of the night. Add to this the children whose only shelter is plastic sheeting or makeshift shacks in the slums, and the number reaches 250,000. They do not have clean water, they are often hungry and disease runs rampant.

To survive, children scavenge in rubbish dumps to find scraps to sell or beg on the streets. Most are not in school and have poor health. Many children are abandoned and are at high risk of abuse, exploitation and child trafficking.

These are some of the stories of children and young people who HOPE has worked with – names have been changed to protect the innocent and photographs .

“My father walked out on my mother two months before I was born. When I was not even two, 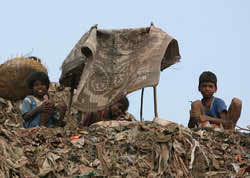 we were thrown out of the house because my mother could not pay the rent. I started working when I was six. I learned to scavenge from the rag-picker boys who came to the riverbank to look for pieces of plastic. I had to fend for myself. My mother went without food or she would just have some tea. Only in the evenings could we eat rice, but not always. So I had to buy food out of my own earnings. I woke up with the sun and went to scavenge.

There is only one incident that happened to me those days that I will never forget. One day, I went before dawn to Soaltee Lane to look for empty beer cans, bottles, and food in the garbage containers that had been thrown away by the nearby Hotel Soaltee Oberoi. I climbed into the container and searched for things I had come for. I was disappointed when I could not find anything. When I jumped down in haste, I stepped on a broken piece of glass. I slashed my left foot badly as I was not wearing any slippers. When I stared at my foot with the blood gushing out, I felt nauseous. I sat down, and out of fear and pain, I began to cry. I tried to tear off a piece of cloth to bind the cut, but the skirt I was wearing was of old polyester and would not tear. I tried to stop the blood but it just gushed from in between my fingers. I felt so helpless and I thought I was dying.

It was just about morning, and some people were passing by. A man stopped and gave me a note of 2 rupees. “Go get medicine for yourself,” he said. The sight of the money made me realize how hungry I was. I had not eaten anything the night before. I stood up. I put a piece of newspaper over my bleeding foot and walked to a shop on my toe. I bought a cup of tea for myself. I did not go to the medical shop because I felt the hunger more than the pain”.

Sukhadi lives with her mother and elder brother in the tribal village of Mohammad Bazar. He father had died when she was young, meaning her mother raised the children alone, and her brother was required to leave school to work the farm.Due to their poverty and lack of a father, she was taken out of school at an early age and put into work both in farming and child care. The MBBCDS staff identified her as a school dropout and enrolled her at one of the local government schools, as well as the coaching centre.While she was very successful at her studies, just before she was to take her high school entrance exams she was engaged to be married (a regular occurrence in tribal villages in rural India). But the MBBCDS staff were able to convince both her and her mother to allow her to sit the admission exam for a good local high school. She scored very well in the admission test and was allowed to continue her education rather than be forced into early marriage.

My parents are from a remote part of West Bengal and are very poor. Growing up, I was always vomiting after eating, but my parents are not well educated and so they did not consider this serious, they thought it is common for newborn child. But as I grew there was no improvement and I continued to be sick daily. My parents took me to the village doctor many times and finally he failed to diagnosis the case, and so referred it to the Govt. Hospital in Kolkata for diagnosis when I was 1 & ½ years old.We travelled to Kolkata to go to a Govt. Hospital and roamed from one to the next for three days, trying to get treatment. However, there were no beds for me, which is very common and we couldn’t find anyone to help. Then we came to know about the HOPE Hospital and they admitted me under Dr. S.S. Bose (Child Specialist). Then I was referred to Dr. Ajoy Ghosh (Pediatric Surgeon) of the HOPE Hospital the following day as Dr. Bose suspected that there is something wrong in my food pipe.Dr. Ghosh was able to diagnose that I was suffering from Congenital Hypertrophy Pyloric Stenosis (a very small tumor in the food pipe) since birth. HOPE Hospital operated on me and it was a great success. I was discharge in a healthy condition after a week. HOPE saved my life and I am so grateful. I then started attending one of the coaching centres and I am now at school and enjoying my studies. 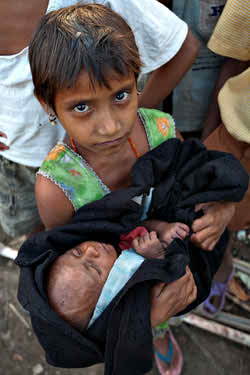 Pari was 22 when a volunteer admitted her to the HOPE Hospital. She was moved from a Government Hospital where she was found lying in the floor in an unhygienic and unhealthy condition where she had been without any treatment for several months. Pari was suffering from fever along with some psychotic symptoms and was completely in a withdrawn state.

On investigation it was found that she was suffering from Hyperglycemia and accordingly HOPE’s doctors administered medicine to control her blood sugar level. She was then referred to a Psychiatrist in the hospital as Pari had slight psychotic problems and was talking irrelevantly. Within a few days, Pari began to respond to the treatment in the HOPE Hospital.

Due to the tremendous effort of the doctors, nurses and counselor in the HOPE Hospital, within a month Pari showed improvement and started speaking to a few of the staff. Gradually she also responded well when she was spoken to and could reply to questions. One day she told the hospital staff that she has one older brother and her had father died, but she had no information about her mother.

After almost one month of treatment she was able to tell staff that she was from Jagadballavpur in the Howrah District of West Bengal. The HOPE Hospital staff, with help from HIVE India (Partner organisation of The Hope Foundation) were able to find her home in a remote village of Howrah District and her brother was traced by our field workers. Her brother came to meet her at the hospital immediately and was tremendously relieved and happy to be reunited with her. It was the first time Pari was seen smiling. Her brother said she had been missing for the last seven months and naturally wanted to take her home at once. Pari was kept at the hospital, as she needed to continue her treatment for a few more days, but was discharged with the instruction to remain as an outpatient for further monitoring.

Pari is now completely recovered and is living with her brother and other members of his family.